How Do Muslims Celebrate Eid Ul Adha Around The World? 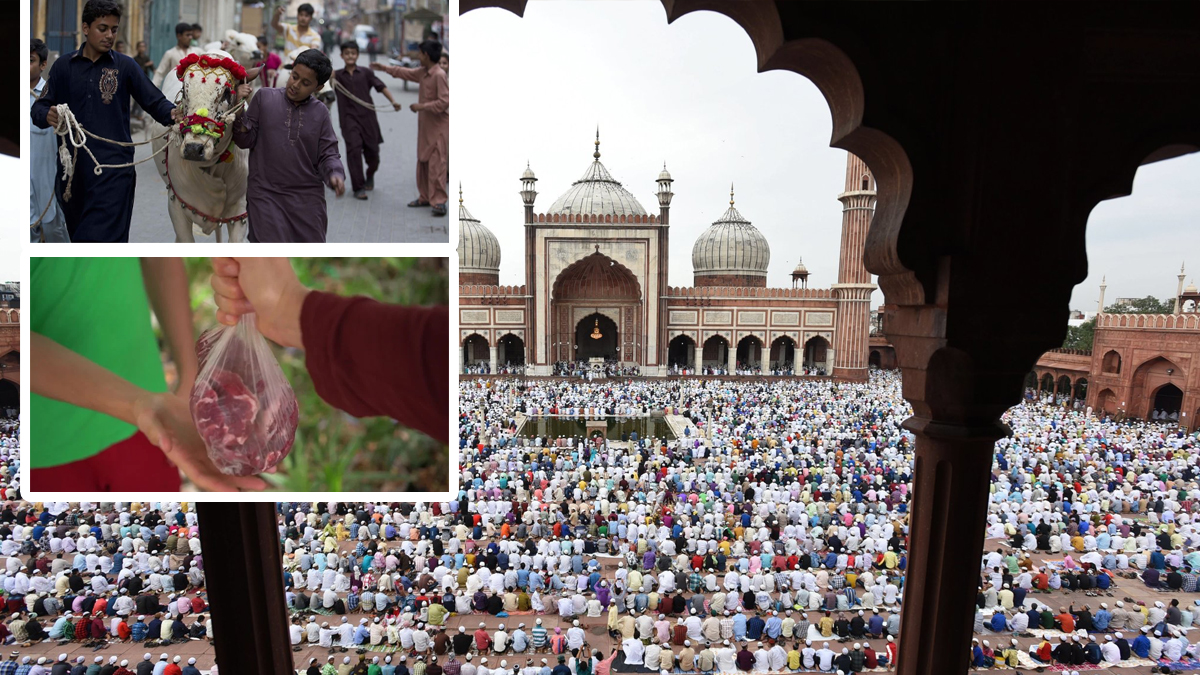 In Pakistan, Eid ul Adha is a four-day holiday that is established annually when the moon is sighted to signify the start of the Islamic month of Dhul Hijjah. On the tenth day of the month, the male family members leave for Eid prayers before returning home to sacrifice the cow, goat, sheep, or camel they had pre-purchased from one of the several cow and goat mandis in Pakistan.

While the ritualistic offerings last for three days, the celebration actually starts much earlier, with some people purchasing their sacrificed animals almost a month in advance. The animals are then cared for by friends and neighbours until the day of the sacrifice, with youngsters having the most fun. Homeowners frequently have enough space inside their homes to keep their pets, but those who live in apartments in a crowded metropolis like Karachi are forced to keep them in a communal tent that is typically erected on the side of the road close to their homes.

After the sacrifice, children love going to see relatives with their parents to distribute the meat. The occasion has been proclaimed an official holiday by the government. During the summer, barbecue gatherings are also fairly popular. Many people own a small grill that they use to smoke and cook offal as well as beef and fowl for a family feast.

Being a Muslim nation, the UAE also observes a 3 to a 4-day long public holiday in honour of Eid ul Adha. Muslims in the UAE gather at Eidgahs, community prayer spaces, for prayers and sermons. People dress up in their festive best, share sweet sweets with their neighbours, and give “Eidi” to the younger family members after exchanging “Eid Mubarak” greetings.

In the United Arab Emirates, it is legal for people to slaughter animals in their homes as long as they clean up after themselves. However, the government stresses the need for proper animal sacrifice in order to prevent disease and encourages citizens to register their sacrifices at public slaughterhouses where the livestock will be inspected for disease and the authorities will ensure safe transportation of the meat.

When we talk about Eid ul Adha celebrations around the world, we must bring up our neighbour, Iran, where the holiday is observed in a manner akin to that of the United Arab Emirates, with communal slaughterhouses serving as the location for animal sacrifices and Eid prayers taking place in the morning before people head to the slaughterhouse to collect the meat. After that, they put on their best clothes and rejoice with a feast of beef or mutton among their loved ones. The nation observes a public holiday on Eid ul Adha.

In the past, Tajikistani Bakra Eid was observed in a manner similar to that of Pakistan, with residents being permitted to offer animal sacrifices in the vicinity of their homes. New laws, however, mandate that all sacrifices be made inside the approved areas. After Eid prayers, youngsters visit their neighbours and are awarded with treats and money for dressing their best in their new outfits. The day starts with Eid prayers.

The men then proceed to the designated locations to sacrifice the animals, and as soon as the meat is delivered home, the feast’s preparations get under way. In Tajikistan, the family’s children prepare and serve this meal, starting with an array of appetisers including fruits, cakes, and biscuits before moving on to the meat-heavy main course.

With cakes and sweets, the meal comes to a pleasant conclusion. A household also has distinct dining places for men and women, and there is an open-door policy, so neighbours are welcome to stop by and partake in the feast.

In the majority of the Muslim nations in Africa, including Tunisia, Morocco, and Egypt, men conduct Eid prayers before sacrificing an animal—usually a sheep, goat, or ram—and partaking in a feast with their family. It is a day off from work and a chance to celebrate with friends and family while also keeping in mind the less fortunate and making sure they get to have a hearty meal with their families.