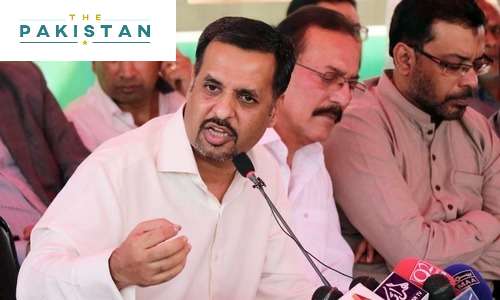 The Pak Sarzameen Party Chairman Syed Mustafa Kamal on Friday demanded from the government to restore the city of Karachi as a single district as it was before 2013 in order to help solve the problems faced by the city’s residents.

“Handing over Karachi to the federal government or the army is not the solution of the city’s problems … the biggest problem of Karachi is its division from one district to six districts on linguistic lines,” said the PSP’s Kamal at a press conference.

Flanked by another PSP leader, Anis Kaimkhani, he said the partition of Karachi province has weakened the city’s administrative structure and given birth to all the problems at the moment.

Meanwhile, Kaimkhani said dividing the city into so many districts was a big mistake and a huge blunder and needs to be reversed. He said that just like the division of Sindh is unacceptable so is the division of Karachi.

Karachi infrastructure has crumbled over the years mainly under the rule of PPP and recently the debate over whether the provincial government can manage the city or not has come to the fore.

Most of the Karachi’s residents including the local population as well as the civil groups and business representatives have repeatedly asked the city to be handed over to either army or be brought under the control of the federal government.

Meanwhile, as the debates linger the political stakeholders in the city have raised their hands in the air while shifting the responsibility on eachother i.e. the District, Municipal Council, KMC, SSWMC, WASA, DHA, Cantonment Boards, Mayors etc.