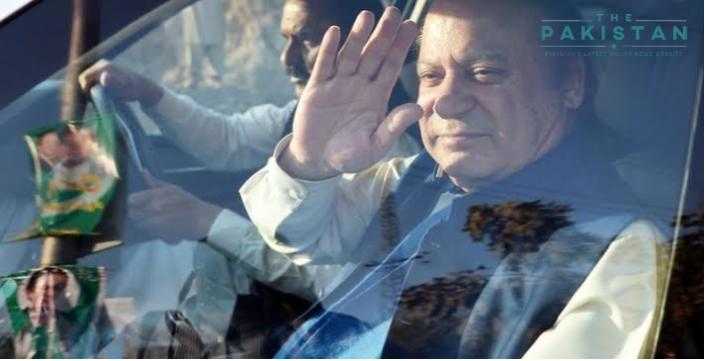 A notice declaring former prime minister Nawaz Sharif has been hung outside an accountability court in Lahore after he failed to present himself before the court despite repeated calls.

Earlier, the court had given Sharif one last chance to appear before the court in person but he refused to do so on the grounds that he was currently receiving medical treatment in the country owing to his low count of blood platelets.

Meanwhile, the court has also issued directives to the investigation officer to send a notice to the former premier to his residence in London, England through the Ministry of Foreign Affairs.

In addition, the court had also directed the officers to issue public summons for Sharif in major English and Urdu newspapers of the country.

The Islamabad High Court had asked him to appear before the court on October 7 in the Azizia and Avenfield references as summons were sent to him at his London residence.

The National Accountability Bureau had also made a recommendation to the government for the cancellation of Sharif’s identity card and passport as after he refused to appear before the courts.

Sharif has been at the receiving end of the judiciary ever since he launched a diatribe against them during his speech to the PMLN leadership through the video link.

Sharif had left the country last year on medical grounds as his personal doctors and those from the opposition had established that he was suffering from serious illnesses. The government and judiciary had allowed his release after it was reported that the illnesses put his life at risk and if anything was to happen to him, the blame would fall upon the government.

However, that decision has backfired as the former premier has now refused to return to the country despite multiple summons by the court.