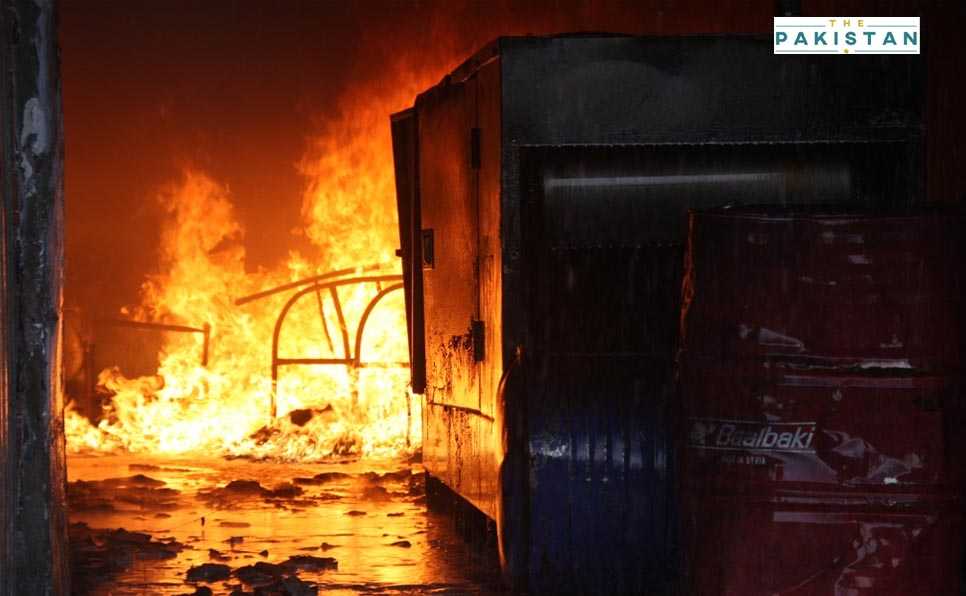 Lahore’s famous Hafeez Centre — hub of electronics products in the city with around 500 shops– was engulfed in a fire that burned half of the 1,000 shops to crisp.

Responding to the blaze, emergency teams were able to evacuate all of the 25 individuals who were stuck in the building. Fortunately, no loss of life was reported after the incident.

According to sources, the fire erupted in the morning hours and firefighters were at the site by 6:15 am and put out the flames for over 14 hours till the filing of this report at 8 pm.

The Rescue 1122, Pakistan Navy, Rangers, City District Government, and Lahore police all participated in the rescue operation. The five-story building houses over one 1,000 shops of mobile phones, computers, laptops, UPSs, and other electronic accessories.

Sources claim that around 40 percent of the shops situated largely on the second, third, and fourth floors were completely burnt. Meanwhile, around 200 shops were partly damaged.

Rescue officials said that the fire began on the second floor and moved upwards from there onwards. The fire was seen from the people on the road and the neighborhood.

The blazes were brought under control after firefighters intervened and all of the 25 laborers stuck inside the building rushed to the roof until they were helped by the officials.

Punjab’s Chief Minister Usman Buzdar called upon officials to ensure all support was extended to the rescue and firefighting operations on the place of incident.

Moreover, the Punjab government has also constituted a fact-finding committee to investigate and identify the origin and cause of the fire. The committee includes 14 members and will be spearheaded by the Lahore deputy commissioner.

In addition, IG Punjab Inam Ghani also asked senior officers to go to the spot on their own to provide full support to the fire rescue and relief operation.