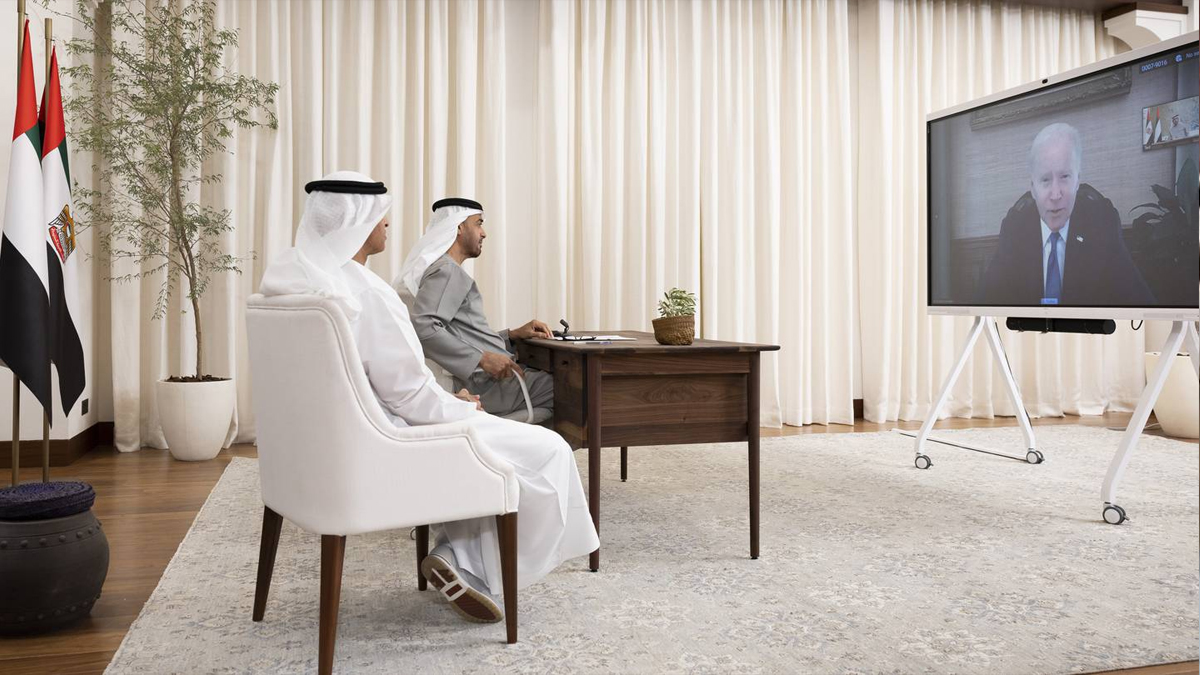 The presidents discussed their mutually beneficial strategic partnership as well as major world issues, such as energy security.

The strategic Partnership for Accelerating Clean Energy, which was established on Tuesday to achieve shared climate goals, boost global energy security, and expedite the energy transition, was also discussed during the conference.

Sheikh Mohamed was present when the agreement was inked at the Abu Dhabi International Petroleum Exhibition and Conference.

Minister of Industry and Advanced Technology

Amos Hochstein, a special presidential co-ordinator, and Dr. Sultan Al Jaber, minister of industry and advanced technology and special envoy for climate change, signed the agreement on behalf of the US and the UAE.

By 2035, the alliance will spend $100 billion to generate 100 gigawatts of sustainable energy in the United States, the United Arab Emirates, and other developing nations.

“We addressed our recently established cooperative endeavour to speed up the energy transition and underlined the depth of UAE-US cooperation in a video conversation with President Biden today. Energy security and our common commitment to improving climate action were other items we discussed,” Sheikh Mohamed tweeted.

In keeping with their net-zero 2050 objectives, the leaders stated during the call that they are committed to increasing climate ambition and climate action.

Both nations recognised that Pace will be a crucial motivator to attain net zero by driving investment in renewable energy projects, technologies, and resources as they looked ahead to Cop27 in Egypt later this month and to Cop28 in the UAE next year.

They emphasised the significance of a quick and efficient energy transition and how it may open up new economic opportunities and promote more sustainable growth.

Along with pledging to intensify their close cooperation, both leaders expressed their shared aim in stabilising the world energy market and boosting their investments in renewable energy.

Sheikh Mohamed spoke about the substantial ongoing investments made by the UAE to reduce the carbon footprint of the conventional and renewable energy sectors.

He underlined the UAE’s long-standing concern on the effects of climate change, especially on nations like the UAE with extensive coastlines and harsh climatic conditions.

He discussed how the UAE has taken the lead in the global energy transformation, doubling its own capacity for renewable energy over the past 10 years, including the construction of three of the biggest and most affordable solar projects in the world.

In addition, Mr. Biden praised Sheikh Mohamed “for his leadership on climate issues” and expressed his support for the UAE hosting Cop 28 the following year, according to a readout from the White House.

The importance of strengthening the “strategic connection” between the two nations was also covered by the leaders.

Control of Carbon and Methane

According to the White House, the US and the UAE will work together on a number of clean energy programmes, including the control of carbon and methane, the use of civil nuclear energy, and the decarbonization of the transportation and industrial sectors.

Sheikh Mohamed informed Mr. Biden on the finance and assistance provided by the UAE for renewable energy projects in 31 small island developing states in the Caribbean and the Pacific Ocean, as well as an increasing number of initiatives in the US. These projects are located on six continents.