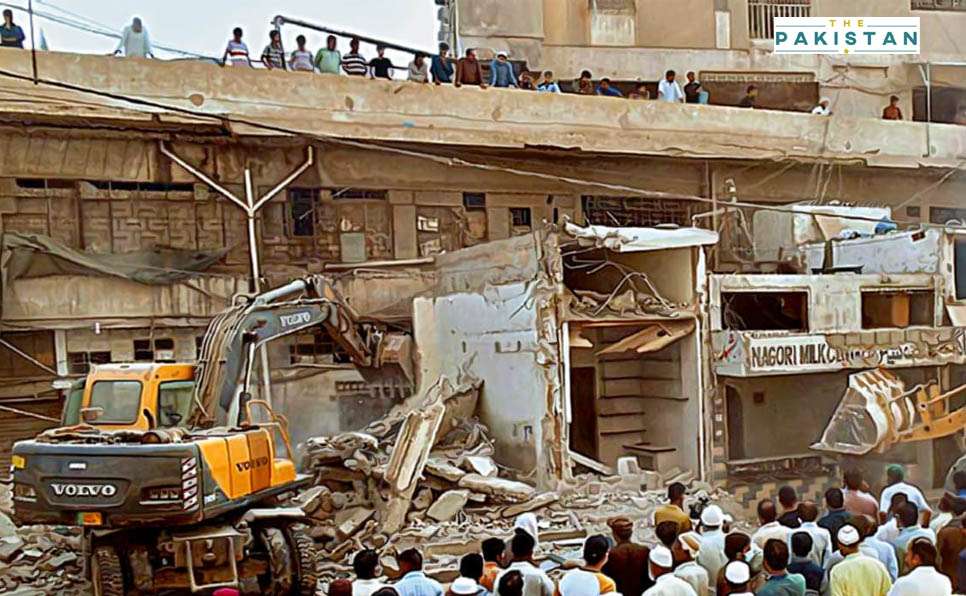 Authorities in Karachi on Monday began an anti-encroachment drive to clear illegal properties blocking the nullahs and drainage systems across the city.

The actions came days after massive flooding caused by record rains inundated the city with water as most of the sewerage blocks were clogged with filth or were constructed upon causing water to overflow onto the roads.

A wave of panic was spread among the residents of the city when a mosque, on the directions of authorities, through a loud-speaker announcement asked residents in the Liaquatabad F.C. area to clear out their homes as early as 7am in the morning.

The audio clip of the announcement was widely shared on social media resulting in widespread condemnation of the move. Meanwhile, another video clip showed the residents of the said area protesting late night shouting slogans against the government for its actions.

In the morning, the residents then took to streets, protesting on the major roads blocking traffic between Liaquatabad and Nazimabad to stop the anti-encroachment drive. The protestors were pacified after authorities — local as well as the provincial ensured the residents that the action was being taken only against commercial properties not the residential ones.

Meanwhile, the authorities also said that in case any residential is demolished, the government will ensure the owners are duly compensated and are provided with alternate lodging.

The building of commercial properties along the nullahs were the primary cause behind flooding in the city as the government failed to take pre-emptive action and clear out the storm drains.

The failure to do so has now caused losses worth billions of rupees in the city in the form of broken roads, filth etc.