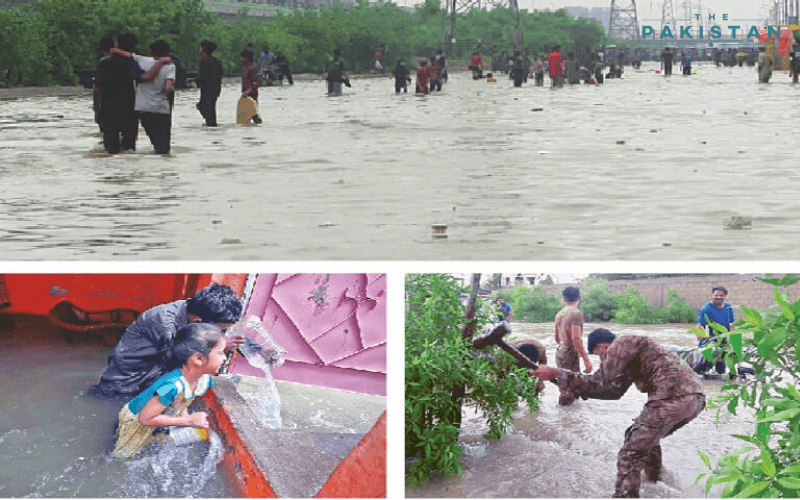 The Pakistan Meteorological Department (PMD) on Thursday said that various areas of the country are expected to experience rain with thunderstorms during the day whereas some regions will brave hot and humid weather.

“It will be partly cloudy in the upper parts of the country on Thursday. However, rain with wind and thunderstorms is expected in Upper Punjab, Islamabad, Khyber Pakhtunkhwa, Lower Sindh, Kashmir and Gilgit-Baltistan,” the release issued by the PMD said on its forecast for Thursday.

Sharing a somewhat similar forecast for weather on Friday, the department said there are “chances of rain with wind and thunderstorms in upper/central Punjab, Islamabad, Khyber Pakhtunkhwa, Lower Sindh, Northeast Balochistan, Kashmir and Gilgit-Baltistan on Friday.”

“The weather will be hot and humid in other parts of the country.”

The country received a steady downpour of monsoon rains a week ago for nearly four days as many cities of the country, especially southern Sindh and Gilgit-Baltistan were lashed by heavy rains.

In its outlook for monsoon 2020 (July to September), the PMD said “monsoon rainfall is expected to remain near normal (+10 percent) during July to September 2020 in Pakistan. Sindh and Kashmir are likely to receive moderately above normal (+20pc) rainfall during August and September.”

“Area weighted normal rainfall of Pakistan during Jul – Sep is 140.8 mm,” it added.

The outlook further said that the impacts from the downpour wil; increase the possibility of “riverine flood potential in the main rivers of the country,” while increasing the “probability of urban flooding in metropolis cities and flash flooding in hill torrents of Punjab.”

It also said that the rains are likely to have a good impact on the rice crop and negative impact on the cotton crop. The rains will also ensure   sufficient water availability for irrigation and power sectors.

Meanwhile, the rains can easily turn into a bane as they are the most “conducive environment for locust breeding in deserts during monsoon season.”   Sufficient water availability for irrigation and power sectors.