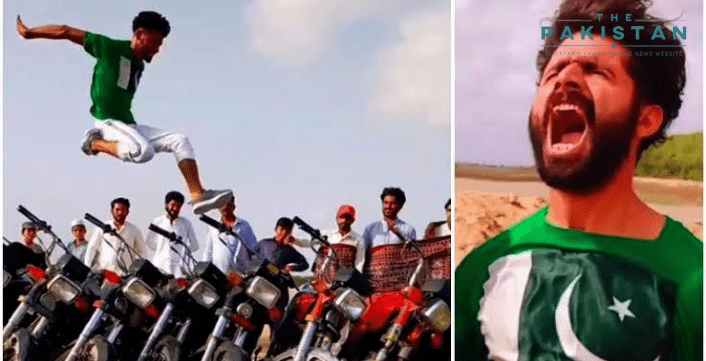 A video recently went viral in which a man who goes by the name of Asif Magsi can be seen leaping over 11 motorbikes has catapulted the athlete to overnight fame.

Magsi, who hails from Thatta, Sindh, was lauded for his athletic skills on social media where various leading politicians were moved to help him secure a coach so that he can be trained for Olympics. Since then, Magsi said that he has been called to Lahore to train at Pakistan Sports Federation where he will train to become a long jumper and compete at international competitions .

When asked what moved him to become a long jumper, Magsi said that “my motivation came from my desire to join the Pakistan Army for which I trained hard but as I was unable to get into the Army, I started practicing for long jumps. After which, in order to showcase my talent, I began making TikTok videos by adding patriotic songs.”

“Everyone has the ability to do something like this, it’s just that I had the passion to pursue it and was able to reach this skill level in a short time but with proper training, I believe I can succeed to represent the country,” Magsi told a journalist.

In another video, Magsi can be seen jumping a water canal while holding Pakistani flag in his hands and makes a perfect landing on the ground.

After watching Magsi’s clip on social media, acclaimed long jumper and nine-time Olympic gold medalist Carl Lewis appreciated his resolve and . In a tweet, he said “actually with his lack of fear, he has the perfect mindset.” The recognition from one of the greatest long jumpers to ever exists is a huge motivation for the Asif from Thatta who now needs to focus on his training and ensure he keeps the momentum.

Inflation clocks in at 9.3pc in July amid rising food, fuel prices