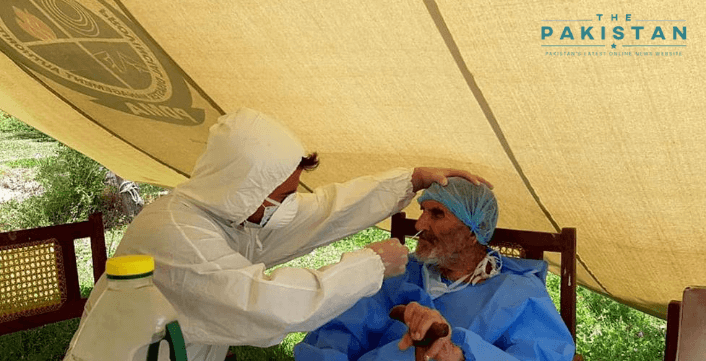 A 103-year-old man in Chitral, who has safely recovered after contracting Covid-19, is being dubbed as the oldest survivor of the virus in the world.

Doctors and relatives of the centenarian claimed that Aziz Abdul Alim, who lives in a small town of neighbouring Chitral, is one of the oldest Covid-19 survivors in the world.

“We were stressed for him given his age, but he wasn’t stressed at all,” Alim’s son Sohail Ahmed said to news agency Reuters.

Aziz’s son said that his father has been through thick and thin of life and was not even worried after contracting the virus. He had, however, isolated himself from family members.

Aziz has outlived three wives and nine children and has divorced himself from the fourth wife and is now currently living with his fifth one.

Aziz’s fortunate recovery is a welcome sign as the country’s infection and transmission rates have fallen off a cliff since peaking in May.

The country currently has one of the lowest Covid-19 transmission rates in the world.

Ever since the first Covid-19 case was reported in the country in March, the total tally has now reached to 272,658 with more than 236,000 recoveries. Meanwhile, the total deaths from the virus have reached 5,812.

In neighbouring India, the cases have increased exponentially over the last four months. Total reported cases have now crossed the 1.34 million mark with 849,000 recovered and around 31,358 deaths.