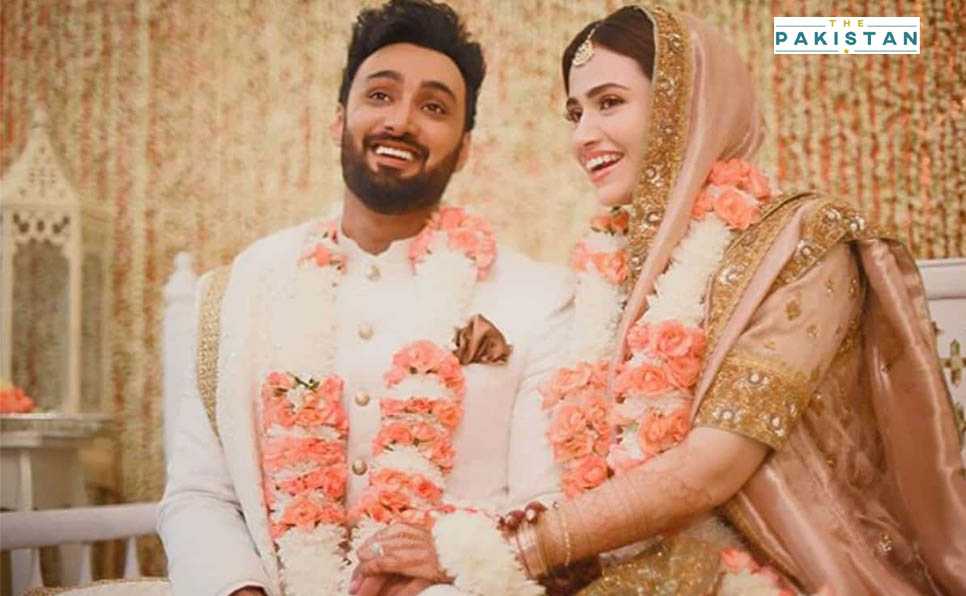 Actress Sana Javed announced that she is married to Umair Jaswal after sharing a picture on her Instagram account where the two can be seen laughing with each other.

Both Sana javed and Umair jaswal made a beautiful pair on their Nikkah.

The Sammi Meri Waar singer wore shalwar kameez while Sana made a stunning bride in a peach dress.

The couple was immediately bombarded with well wishes from their fans and celebrities as well.

Umair’s brothers Uzair and Yasir Jaswal also shared pictures of the couple welcoming their sister in law into the Jaswal family.

Sana and Umair have been in a relationship for a long period of time and had earlier announced they were together.

Jaswal started his career as a singer back in 2008 after he joined the rock band Qayaas. Umair gained popularity in 2009 with the song ‘Tanha’ and ‘Umeed’.

He later performed in the Coke Studio season 5 with his band in 2012 and performed the song Charkha Nolakha alongside Atif Aslam.

Meanwhile, Sana Javed was born in Jeddah and completed her school and college from the Pakistan International School. She also did her undergraduate from Karachi University.

She began her career as a model and appeared in TV commercials. She later started acting with a supporting role in 2012 series Mera Pehla Pyar and did a small appearance in Shehr-e-Zaat in the same year.

However, she rose to prominence with the role of an antagonist (Mahnoor) in the romantic drama Zara Yaad Kar in 2016 opposite Zahid Ahmed and later became one of the top-rated actresses in the country for her role in the drama serial Khaani which became a household name in the country and around the world.