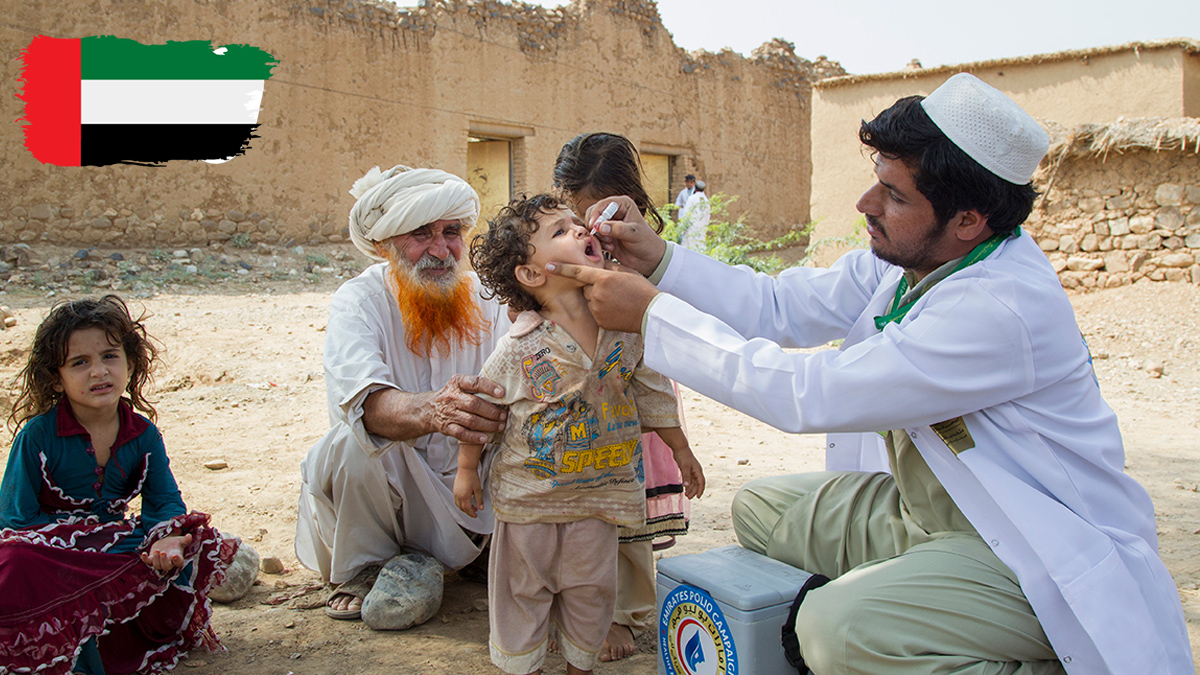 The UAE Pakistan Assistance Programme (UAE PAP) has released the findings of the UAE Polio Vaccination Campaign, which was conducted in Pakistan from 2014 to the end of September 2022. The campaign was successful in giving 647,758,365 doses of the anti-polio vaccine to Pakistanis during that time period.

The action is in response to the President’s Highness Sheikh Mohamed bin Zayed Al Nahyan’s orders and H.H. Sheikh Mansour bin Zayed Al Nahyan’s follow-up as Deputy Prime Minister and Minister of the Presidential Court to provide Pakistan with humanitarian and development aid, support the country’s health sector, and launch related prevention programmes in the nation.

Since 2011, His Highness Sheikh Mohamed has contributed US$376 million to humanitarian and charitable initiatives aiming at funding polio eradication campaigns and supplying vaccines, particularly in the Pakistan and Afghanistan countries that are the focus of his project.

The UAE Polio Vaccination Campaign was able to distribute 192,181,646 doses of the vaccine between July 2020 and September 2022 despite the difficulties caused by the coronavirus epidemic.

More than 103,000 doctors, observers, and vaccination team members, as well as more than 82,000 security personnel and coordination teams, participated in the field activities to conduct vaccination campaigns in a number of Pakistani provinces with an emphasis on providing vaccines to the targeted children. Additionally, the campaign provided funding for specialised vaccination teams to administer immunizations to over 597,000 Afghan refugee children in 22 camps.

Speaking on World Polio Day, which was observed on October 24, Abdullah Khalifa Al Ghafli, Director of UAE PAP, credited the wise leadership’s support for the campaign’s field efforts for the outstanding success of the UAE Polio Vaccination Campaign.

The UAE is notable for its vision and efforts in implementing humanitarian and development projects meant to protect underprivileged peoples and communities from diseases, epidemics, crises, and disasters.

He pointed out that one of the most significant factors in the success of the United Nations programmes for health care is the UAE’s support for various international programmes and efforts to eradicate diseases. This support, he said, has a direct and significant positive impact on improving the quality of life and future for hundreds of millions of people around the world.

Al Ghafli emphasised that the UAE’s international initiatives have helped to forge effective international humanitarian alliances and strategic alliances between governments and UN agencies, including the World Health Organization (WHO), the United Nations International Children’s Emergency Fund (UNICEF), and international nonprofit organisations like the Bill and Melinda Gates Foundation.

Then, he praised the sacrifices and efforts made by vaccination teams made up of medical professionals, nurses, and security guards who overcame difficult field conditions and obstacles to contribute to the program’s effectiveness and great achievement.

The UAE PAP Director wrapped up by saying that World Polio Day represents a humanitarian message that includes commitment and international cooperation to safeguard defenseless children from diseases, particularly polio, and to support the efforts and sacrifices of all contributors and field workers to achieve this humanitarian goal.