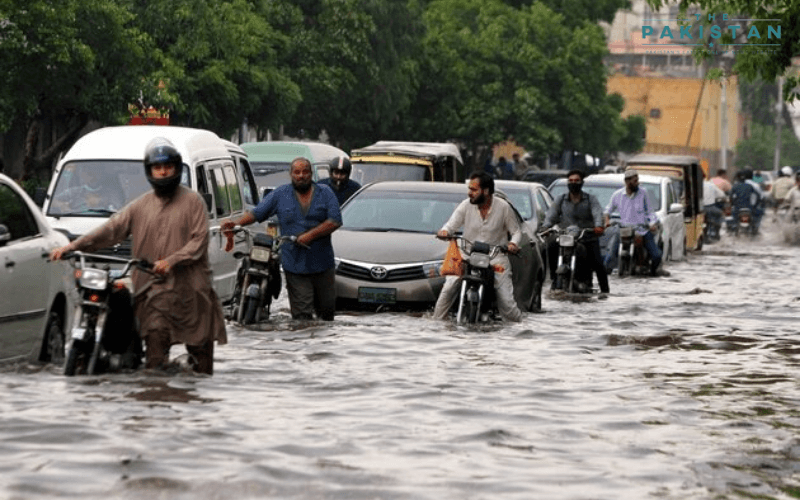 Karachi was battered by monsoon rains on Monday after clouds gathered on the sky engulfing the entire city in its fold.

As per media reports, the rain caused widespread power outages, huge losses to the various buildings and other infrastructure across the city and caused the death of around eight people.

According to the Met Office, the outpour in the city was recorded at around 40mm or 1.56 inches.

It said the weather conditions are expected to remain hot and humid during the next two days with slight chances of rain. However, the system will end by Wednesday with the resumption of scorching weather from Thursday onwards.

Six people including three minors were killed in the storms. Of these, one was from the Liaqutabad, one minor in Malir, three in Ibrahim Hayderi. The people died due to the dilapidated electric infrastructure in the city.

Despite the huge loss, the city’s administration was nowhere to be found. Karachi Mayor Wasim Akhtar imposed a rain emergency but failed to do anything to avert the loss of lives or property.

The National Disaster and Management Authority had warned the urban cities in Sindh of rains and asked the authorities to clear out rain drains. However, the Karachi’s Mayor Akhtar failed to do anything and instead laid the blame on lack of funds.

The rains were preceded by a rush of winds accompanied by dust storms prompting a thunderous rain in the metropolitan city. The Pakistan Meteorological Department had on Friday last week predicted the rains to begin from Monday and last until Thursday.

In its advisory issued on Friday, the PMD said “Monsoon Rains are likely to strengthen in Sindh from Monday.”

“It has been informed by Met office that the Monsoon currents are expected to strengthen in Sindh that may generate Widespread Rain-Wind/Thundershowers in Sindh particularly Karachi, Hyderabad, Thatta, Badin, Sanghar, Mirpurkhas, Tharparkar, Umarkot, Jamshoro and Dadu from Sunday(night) to Tuesday. Few heavy falls are also expected during the period,” read the notice.