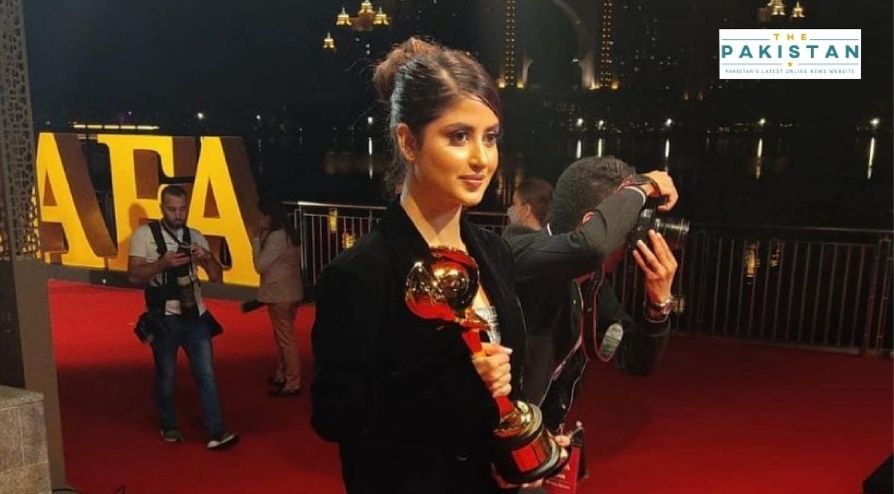 One of the most sought-after Pakistani actress Sajal Ali has won the Distinctive International Arab Festivals Awards (DIAFA) for her contribution to the film and television.

Held each year in Dubai, the DIAFA honours distinguished International and Arab personalities in recognition of their annual achievements and contribution towards committees and society betterment, as per the official website.

These personalities are selected by a qualified committee and honorees are chosen from all fields such as music, arts, culture, business, humanitarian services, etc.

“Assalamualaikum everyone, first of all, I want to say that I am really honoured to be here with such amazing actors and amazing people,” said Sajal Ali, wife of Ahad Raza Mir, also thanked her fans, saying: ‘I really want to thank to all my fans for believing in me. Finally, she thanked DIAFA for honouring her work.

She also shared a clip of her award reception on her Instagram page as well for her fans.

Born in 1994, Sajal Aly is noted for playing a variety of characters in a range of serials—from contemporary social to romantic dramas. Sajal has one sister Saboor Ali, who is also an actress, and one brother. In 2017 Sajal’s mother, Rahat died of cancer. She married Ahad Raza Mir in March 2020.

Sajal first appeared on the screen in a minor role in one of the episodes of the famous comedy-drama Nadaaniyaan. However, she received acclaim for her breakout role in the 2011 ARY Digital’s family drama Mehmoodabad Ki Malkain.

Later, she rose to further prominence for her portrayal in Mohabbat Jaye Bhar Mein, the romances Sitamgar, and Meri Ladli, the family comedy Quddusi Sahab Ki Bewah, and the drama Gul-e-Rana.

Sajal made her Bollywood film debut starring opposite Sridevi in the 2017 Hindi film Mom. Aly also sang the theme song for the series O Rangreza, in which she plays the character, Sassi.