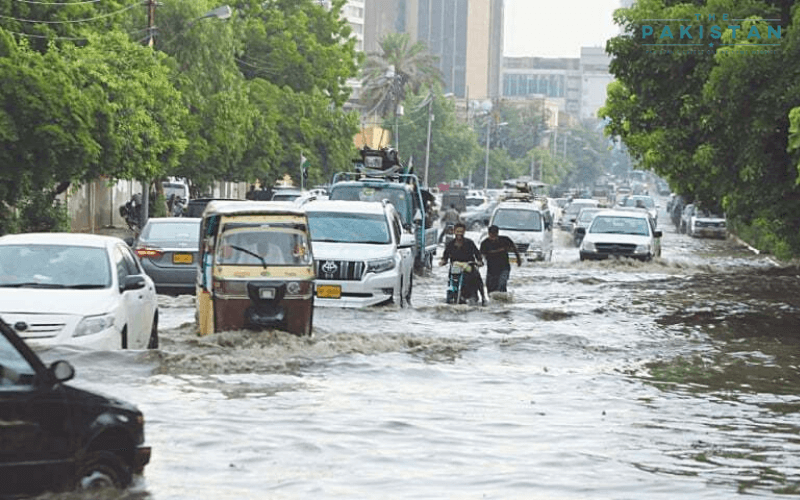 Rains and thunderstorms lashed out on Karachi yesterday taking more than three lives including a policeman due to electrocution and other incidents.

The rain followed record high temperatures which soared to 42 degree centigrade — felt like 44 — as it was the record-high temperature ever registered in the city of Karachi.

Last time, the city registered the highest temperature of 40 degrees back in 1982.

The sweltering heat led to the increase in air pressures causing a wild gush of rain and thunderstorms that rocked the city.

Among the lives lost, a police official of the province’s rapid response force was also electrocuted while working at Ibrahim Hyderi pumping station.

In addition to large scale damage across the city, a walled section of the Bandookwala building collapsed on the I.I. Chundrigar Road destroyed a number of cars as the rocks from the building fell upon them.

The rains immediately caused power disruptions across the city with the majority of the areas without power for more than 18 hours. The K-Electric said the rains were “causing power disruption throughout the city” whereas it said that it had also shut down several feeders for “safety reasons”.

However, it added several “teams are working for swift restoration of power,” the power utility added.

The sheer level of administrative failure from the provincial, city and local authorities was appalling as the lack of efficient drainage systems caused water to pool on various roads, roundabout and at some areas inside the houses as well.

The city’s residents complained over the failures of the federal, provincial as well as local government’s to manage the rain situation.