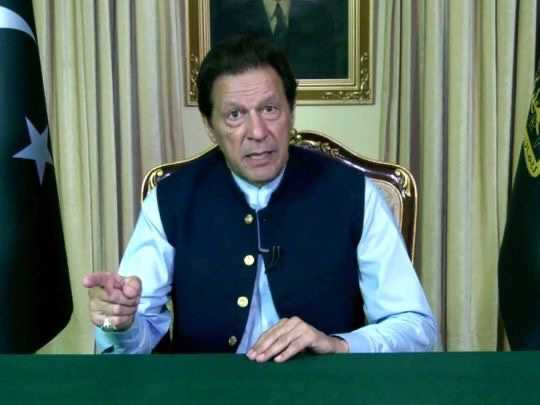 Prime Minister Imran Khan addressed the United Nations General Assembly through video link calling for a day to reflect on the rising islamophobia, end to religious targeting under the cloak of freedom of speech and calling on India to end the siege of Kashmir.

Taking India to the task, he said that I want to make it clear that any attempt by the fascist totalitarian RSS (Rashtriya Swayamsevak Sangh)-led Indian government to aggress against Pakistan will be met by a nation that will fight for its freedom to the end.

He called upon the Security Council to prevent a disastrous conflict and secure the implementation of its own resolutions as it did in the case of East Timor.

He further said that the Security Council had considered the situation in Jammu and Kashmir three times in the past year and advised it to take appropriate enforcement actions.

It also asked the UNGA and Security Council to take steps in order to protect the Kashmiris from an impending genocide by India.

We have consistently sensitized the world community about a ‘false flag’ operation and another ill-conceived misadventure by India, he said while adding that his parents were born in colonial India and he was the first generation that grew up in an independent Pakistan, and warned.

The fascist totalitarian RSS-led Indian government to aggress against Pakistan.

On the recent peace efforts in Afghanistan, the premier said I have consistently maintained over the past two decades that there is no military solution to the decades-old conflict in Afghanistan. The only way forward was and is a political settlement, which involves the full spectrum of Afghanistan’s political actors.

Pakistan is deeply gratified that it has fulfilled its part of the responsibility, he said.