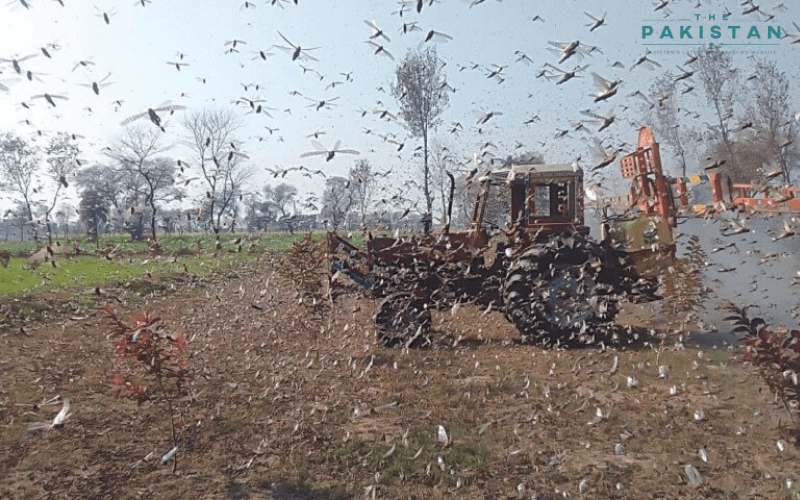 Federal Minister for National Food Security and Research Syed Fakhar Imam while chairing the meeting of National Locusts Controle Centre (NLCC) on Friday said that locust breeding has started in the Tharparkar and Cholistan deserts.

“As per the forecast,summer breeding has commenced along both sides of the Indo-Pakistan border where numerous swarms are present mainly in Rajasthan, India. Hatching and band formation will increase during this month in Rajasthan and northern Gujarat, India as well as adjacent areas of Tharparkar, Nara and Cholistan deserts in Pakistan,” said the FAO at the meeting.

“New reports of desert Locust swarms further east in northern Somalia suggest that migration from northeast Somalia across the Indian Ocean to the summer breeding areas along both sides of the Indo-Pakistan border could be imminent.”

“More swarms are likely to form in northern Somalia in the coming weeks. India and Pakistan have been warned accordingly and they continue to take preparatory Pakistan Meteorological Department mentioned that there are seasonal low lies over western Balochistan. Moist currents are penetrating upper and central parts of the country from Bay of Bengal.”

The meeting was also informed that the more monsoon currents are likely to penetrate in upper and central parts of the country from Sunday.

The Ministry of Foreign Affairs mentioned that Saudia Arabia and Kenya are interested in exchange of information on locusts bilaterally.

The NLCC has also developed a rate integration map,which is shared with all provinces daily.It was also discussed during the meeting that there is a dire need to generate large scale provincial maps to include tehsil level migration forecast.

The survey data showed that the Khyber Pakhtunkhwa reported no locusts, Balochistan has also worked really hard in eliminating locust.In last 24 hours 22 districts were found with locust, resultantly on 222 acres operation was done.

Meanwhile, Punjab and Sindh are expected to see a sharp increase in locusts over the coming month.