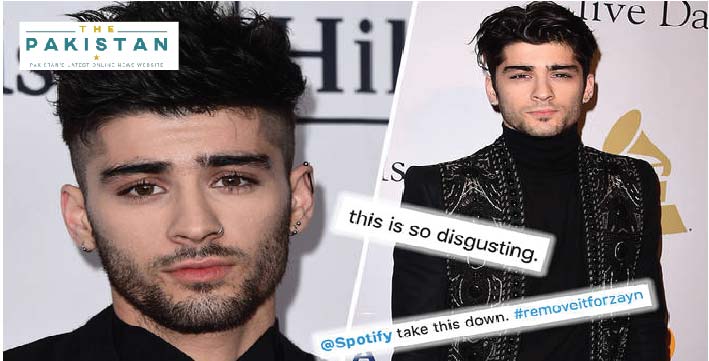 British singer-songwriter Zayn Malik was allegedly targeted for his Pakistani and muslim origins as he was subjected third-grade criticism by a unknown parody artist Una Kompton.

The song was removed by the streaming site Spotify after it received widespread backlash from the listeners and social media.

Kompton produced a sing, back in 2017, where she utters slurs against Malik and blamed him for carrying out the 9/11 attacks on the World Trade Center just because of his Pakistani origins and muslim background.

Even though no single Pakistani was involved in the attack on the World Trade Center, the Pakistani community in Britain as well as the United States repeatedly hurled racial slurs at them.

Kompton’s song was recently uploaded to the streaming platform Spotify which received a widespread backlash on almost all social media platforms. On twitter, the hashtag #removeitforZayn was trending calling on the users to report the song on Spotify forcing the company to bring it down.

“His faith affiliation, skin color, or race does not equal terorrism. If you let a minority of any racial/religious group dictate your view on the majority of said group, then you need to re-evaluate your world view,” said one twitter user.

Zayn — Zain Javadd Malik — was born to Yaser Malik — a British Pakistani and Tricia Brannan Malik — partly English and partly of Irish — in Bradford, West Yorkshire, England. Although, Zayn had an Islamic upbringing, he does not identify himself as muslim.

He started his music career as a member of the One Direction band and the group topped the charts and were dubbed as the 21st century Beetles. However, the band later broke up and Zayn pursued a solo career releasing hits like Dusk Till Dawn in collaboration with Sia.

Zayn is currently in a relationship with model Gigi Hadid and is expecting a child with her.