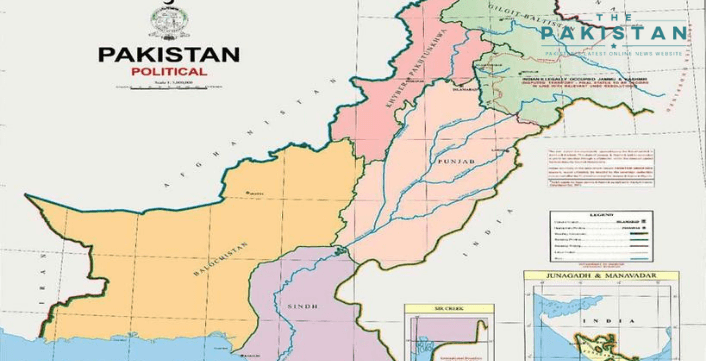 The cabinet on Tuesday approved a new map of Pakistan showing the disputed territory of Jammu and Kashmir as a part of the country in addition to including the states of Junagadh and Manavdar into its fold.

Prime Minister Imran Khan on Tuesday unveiled a political map of Pakistan at a ceremony saying that the whole political leadership of the country, federal cabinet and the Kashmiri leadership fully endorsed it, the Associated Press of Pakistan reported on Tuesday.

Speaking on the occasion, he said the new map clearly showed the Indian Illegally-Occupied Jammu and Kashmir (IIOJK) as a disputed territory whose fate should be resolved only through implementation of the United Nations Security Council resolutions, guaranteeing the Kashmiris their right to self-determination.

Terming it a historic day in the country’s history, he said the only resolution to the IIOJK issue should be sought out in accordance with the UNSC resolutions, sentiments of the Pakistani nation and the Kashmiri people.

“Once again, we clearly tell the world that the only resolution to the IIOJK issue is political as there is no other way,” he said, denouncing the Indian government’s illegal action of August 5 last year which clearly negated the UNSC resolutions and the international laws.

The members of the Federal Cabinet were present during the ceremony televised live by Pakistan Television Corporation.

The prime minister said the new map reflected the sentiments of Pakistani nation, the principled stance of Kashmiris for their just right to self-determination and clear negation of the illegal annexation by the Indian government.

The prime minister regretted that the UNSC resolutions, which had clearly assured the Kashmiri people to exercise their right to self-determination, had not been implemented so far.

Meanwhile, Foreign Minister Shah Mahmood Qureshi said “ the Federal Cabinet had approved a new political map of Pakistan, which was a giant step as it reflected the desire of the whole nation.”

Chairing a meeting to brief media anchorpersons here at the Ministry of Foreign Affairs over the situation in Indian Illegally Occupied Jammu and Kashmir (IIOJK), the foreign minister said release of the new political map was a national requirement.

The foreign minister also briefed the mediapersons about the continuation of brutality and oppression by the Indian forces in the IIOJK and the overall peace and security situation in the region, a press release said.