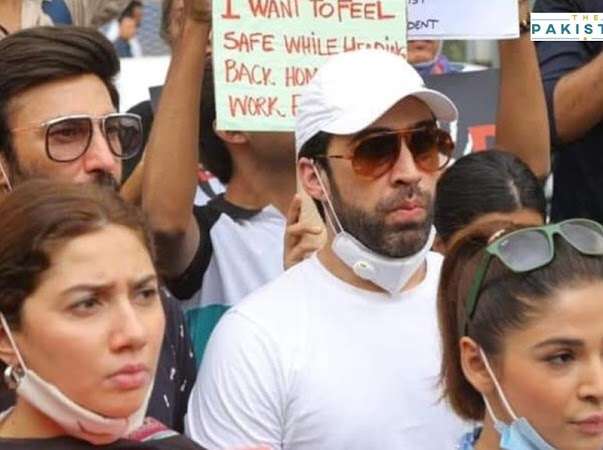 Amid an outpouring of support for victims of rape in the form of rallies, protests and marches calling on the government to mete out strong punishment to the rapists, the government is now taking steps to introduce legislation and punish such culprits.

However, on the one hand, women across the country have gotten together to protest against the heinous crimes, the decision made by celebrities to hold a separate protest at the Karachi Press Club has irked many users on social media

Actors like Mahira Khan, Ayesha Omar, Adnan Siddiqui, Bushra Ansari, Frieha Altaf, Sarah Khan, Sarwat Gillani and Deepak Perwani were all seen standing at the front of the protest holding banners in their hands against the rising number of rape cases.

The social media was visibly confused over the celebrities’ decision to hold an exclusive protest at the Karachi Press Club instead of joining the people on September 10.

Social media users, although lauding the purpose of the protest, said a collective voice would have gone a long way in carrying the cause forward. They said that all of the women in the country were protesting against rapes over the weekend and had the celebrities decided to join the protests, it would have amplified the voices of common people who struggle with such incidents on an everyday basis.

In another simultaneous protest, the transgender community was also protesting against the murder of Gul Panrra — a transgender shot in coldblood.

Shakeel or otherwise known as Panrra was shot by unidentified men in Peshawar city whereas another transgender was fatally wounded who is currently admitted at a hospital.

The transgender community at the press club was also sad to see that the press coverage shifted to the celebrities and they were not given enough coverage.