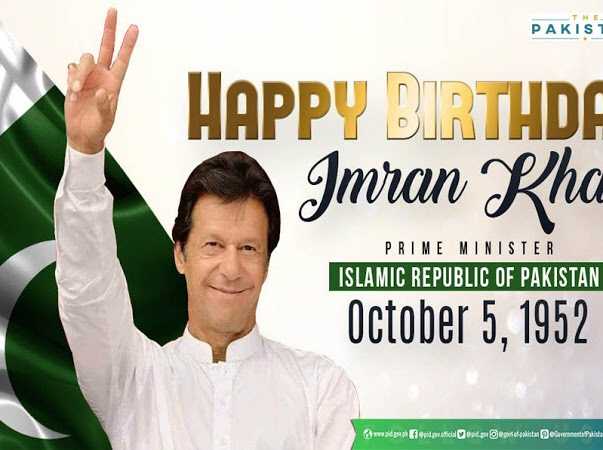 Khan, head of the social media-savvy Pakistan Tehreek-i-Insaf received a plethora of messages on Twitter as #Happy Birthday #ImranKhan was trending at the top on the social media website.

Cricket analyst Saj Sadiq wrote on his Twitter account: #OnThisDay in 1952. The legend Imran Khan was born in Lahore. The greatest ever Pakistani cricketer, he’s been an inspiration for many. He captained Pakistan brilliantly, rounding off his career with the 1992 World Cup victory before entering politics & becoming Prime-Minister.

Meanwhile, actor Shaan went ahead and compared Khan to Pakistan’s founder Muhammad Ali Jinnah saying happy birthday dear PM @ImranKhanPTI .You were born to fulfil a destiny. May the ALMIGHTY guide you , give you strength ,health , and power to overcome all enemies of Pakistan .

Imran Khan was born on October 5, 1952 in Lahore. He went on to study in London where he graduated from Keble College, Oxford in 1975 where he informally began his cricketing career. Later, he became an international cricketer at the age of 18 debuting against England in a 1971 Test series.

In a prolific career — he still holds various cricketing records — Khan played for his country up until 1992. He was Pakistani side’s captain when the country won its first and only one-day world cup. Khan is still hailed as one of the greatest all-rounders to play the game as he scored more than 3,800 runs and took around 362 wickets in Test cricket.

Khan has also been included in the International Cricket Council’s Cricket Hall of Fame.

After which he raised funds to build the country’s first cancer hospital and later found his own political party and won the 2018 elections to become the country’s 22nd prime minister.