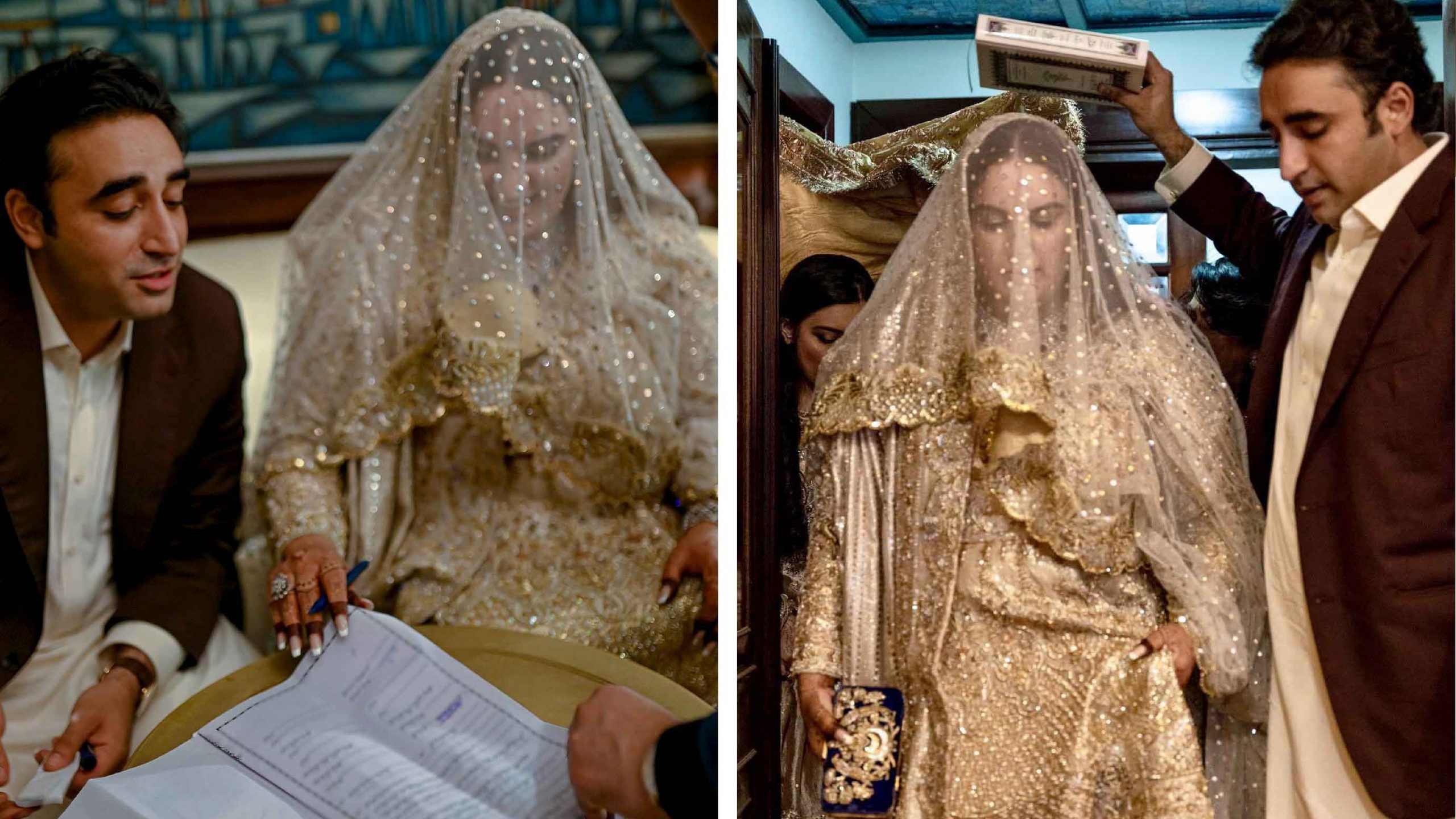 The bride walked down the aisle in a shimmering gold-embellished ensemble by Wardha Saleem, while the groom wore a traditional cream-coloured sherwani for the wedding. The beautiful Nikah took place at the Bilawal House in Karachi on Friday.

As per reports, Bakhtawar Bhutto’s nikah was solemnized by Maulana Ghulam Muhammad Soho of the Thatta Al-Haj. Pakistan Peoples’ Party (PPP) Chairperson Bilawal Bhutto-Zardari and his younger sister Aseefa Bhutto-Zardari welcomed the guests during the ceremony in the presence of their father and PPP co-chairman Asif Ali Zardari. Besides close family members and friends of the bride and groom, a limited number of political personalities and businessperson were also invited to the close-knit ceremony.

Amid the ongoing COVID-19 pandemic, all functions were held in accordance with the necessary precautionary measures. At the same time, strict security arrangements were made at the Bilawal House during the celebrations.

Bilawal Bhutto Zardari took to social media to congratulate his sister on the special occasion. Sharing some pictures from the wedding ceremony, he also posted a sweet message for Bakhtawar Bhutto.

“Happiest moment in many years to see my sister Bakhtawar getting married. Felt like our mother was watching over us in this moment of joy. Wishing them both all the best for their new life together,” he said in his message.

The wedding celebrations began with a Mehfil-e-Milad function on January 24 at the Bilawal House. It was a women-only gathering, attended by Bakhtawar Bhutto’s aunts, Dr Azra Pechuho and Faryal Talpur, along with other members of the party. As per a statement issued by PPP, the Milad ceremony concluded by offering prayers for the success of Bakhtawar Bhutto-Zardari’s marital life. Bakhtawar’s mehndi ceremony took place on January 27 in the presence of close family and friends. The final ceremony of Baraat will be held on January 30, Saturday.

A party spokesperson had earlier said that Bilawal Bhutto Zardari will be suspending his political activities for the week to participate in the wedding functions. Bakhtawar Bhutto-Zardari exchanged the rings with UAE-based businessman Mahmood Chaudhry in an intimate affair on November 27, 2020.

US ready for Omar Sheikh’s prosecution if Pakistan denies, US top officials