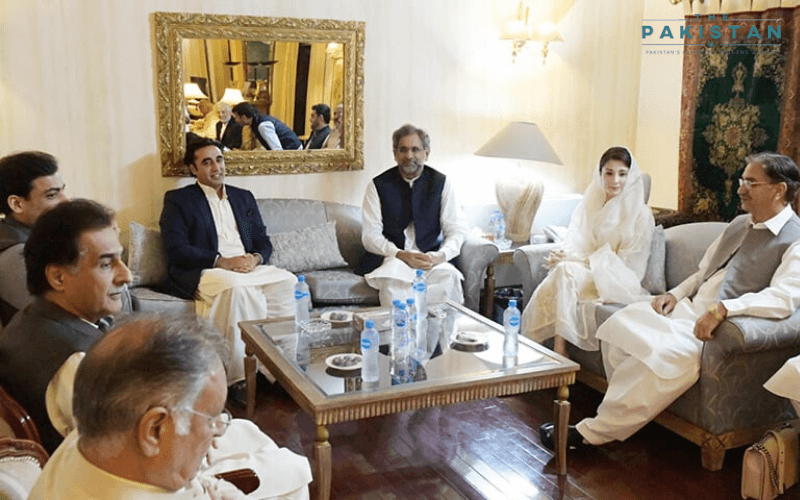 Opposition parties Pakistan Peoples’ Party and the Pakistan Muslim League (N) delegations on Monday met with each other at the Bilawal House to chalk out a plan on how to move forward against the government.

Both sides said that the incumbent government had failed at every level be it economic, foreign policy, tackling Covid-19 or Kashmir issue.

Speaking to journalists, former planning minister Ahsan Iqbal said “No state in the 21st century can continue to exist with such a floundered economy.

“The one who had a car, is now [left with] a motorbike. The one who had a motorbike is now walking [due to poor economic conditions]. People cannot afford education for their children. The labourers, the farmers and graduates with degrees are worried.”

He said that this government has to go. “Getting rid of this government is in line with the aspirations of the people of Pakistan,” he said. “An All-Parties Conference will be called immediately after Eid-ul-Azha with consultations of all parties.”

The opposition’s efforts to launch an anti-government alliance have gained momentum as the top two leaders Bilawal Zardari and Shabaz Sharif both held a phone conversation on how to move forward.

Sharif has been under quarantine for the past weeks after testing positive for the coronavirus.

Both parties have also sought to unite the remaining opposition parties into the anti-government alliance as well.

However, earlier call from Rehman was refused by by both the PPP and PML-N as he refused to delay the conference until after the passing of budget.