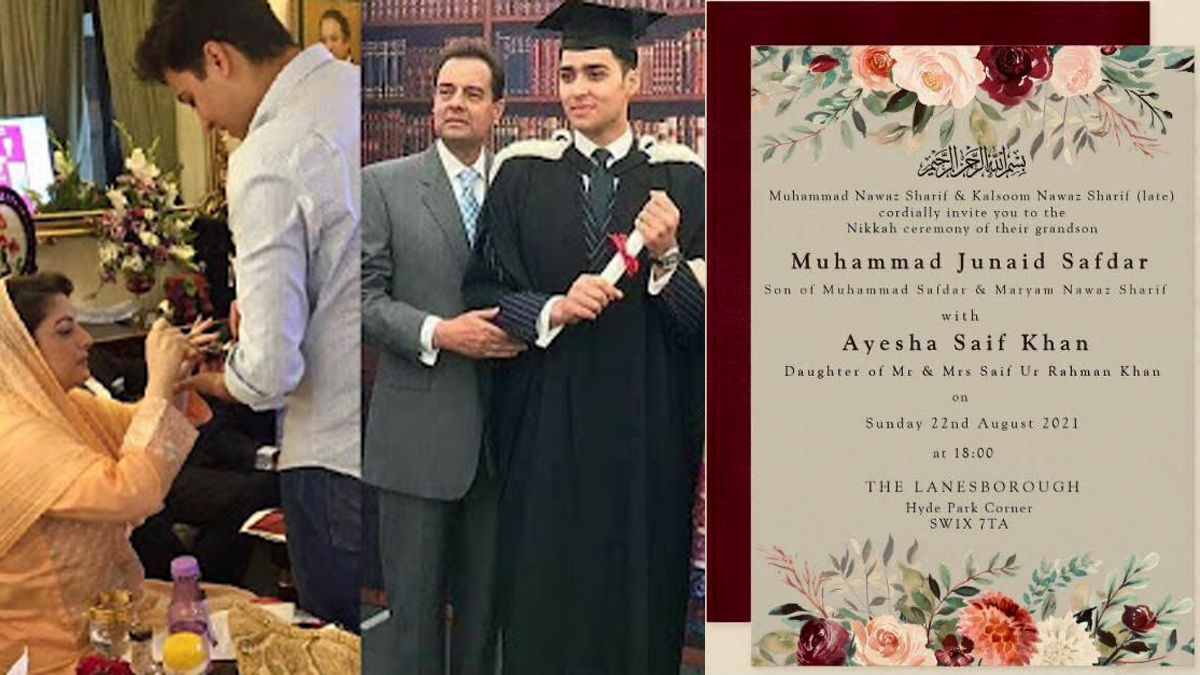 The wedding is to take place in two weeks in London’s Lanesborough Hotel.

As per media reports, both parents – Maryam Nawaz and Captain (R) Safdar – will not be attending the wedding. Furthermore, even if Maryam Nawaz and Safdar get permission to travel to London, they will have to spend a 10-day quarantine period since Pakistan is on the red list of countries.

Preparations for the wedding have begun as the family has started handing out invitation cards to relatives and acquaintances.

Maryam, in a tweet, said that the Nikah is set to take place on August 22. “Unfortunately, I won’t attend the ceremony owing to bogus cases, blatant victimisation, and my name on ECL,” she wrote while sharing an image of the invitation card.

In a second tweet, she recalled being jailed when her mother Kalsoom Nawaz passed away due to cancer.

“I won’t be able to share my son’s happiness, but I will never make any request to this government for travel abroad,” she said.

Junaid Safdar’s wife to be – Ayesha – is the daughter of Saif-ur-Rehman, the head of now-defunct Ehtesaab Bureau. He was blamed for targeting the opponents of Sharif during his second term as the prime minister of Pakistan.

He had been a member of the Senate of Pakistan as a candidate of the PML-N. In 2012, the Federal Investigation Agency had issued his red warrants and contacted the Qatari government to extradite Rehman to Pakistan.

Maryam was placed on the ECL after her conviction in the Avenfield properties case filed against her and her father, PML-N supremo Nawaz Sharif, by NAB. The government had let Nawaz travel abroad on medical grounds in November 2019, but Maryam could not go along with him as her name was on the no-fly list.