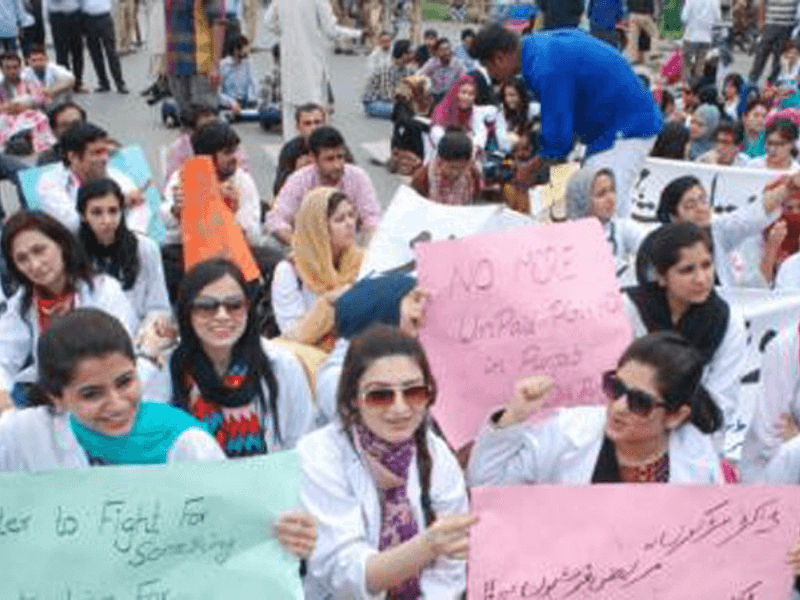 LAHORE: Clash in students and activists of YDA happened at Mayo Hospital on Wednesday in protest against the administration of the university / hospital and the Punjab administration for the non-provision of personal protective equipment to doctors treating coronavirus patients in public hospitals.

“We, the Kemcolians, hate politics and have always been out of all the marches and other electoral gimmicks to an arm’s length. But we are continuously refused justice and are pressured by YDA and administration hooligans to run out of hospital and take to the street, “KEMU students and graduates said after the confrontation with the Mayo Hospital YDA activists.

We alleged, “Our colleagues Dr Mazhar Rafique, Dr Faheem Mahr and Dr Sardar Nouman Afzal were assaulted on the university premises by the YDA miscreant.” Dr. Gada-e-Hussain and Dr. Waqar from YDA hooligans have life threats. Dr Waqar and the younger brother of Dr Mehr Faheem were assaulted at his residence by YDA in Gawalmandi. YDA is still blackmailing the Mayo Hospital MS, and to our dismay, the hospital administration is dancing to their melodies.

“KEMU’s students and graduates said King Edward Medical College has 155 years of history, adding,” We are recognized as the best medical college in Punjab and without our teachers this is not possible. We promise to stand firm against a few miscreants of the Young Doctors Association (YDA) to demonstrate unity with their professor and fellow colleagues who have been badly beaten at university premises.

“They added,” We are calling on university administration to hurry the proceedings, declare their decision and take effective stern punitive measures against those hooligans who locked the profe. Anything other than that would not be tolerable and will compel us to demonstrate at The Mall.” “We have made a proposal for FIR, but no FIR has yet been approved.

We are asking the university also to take up this matter. We are also asking the IG Punjab to direct that the SHO concerned register FIR. We call on our university to provide protection to doctors at university premises in order to prevent such an incident in the future.

Though finding out that most of Punjab’s 1,247 ventilators are out of service, the GHA office-bearers challenged the absence of the protective equipment that came from China and other countries as medical workers were forced to operate without protection.

The GHA office-bearers later lit candles in remembrance of doctors and nurses who laid down their lives while fulfilling their duties to provide treatment to coronavirus patients outside the Specialist Healthcare and Medical Education Secretariat (SHC&ME) headquarters.