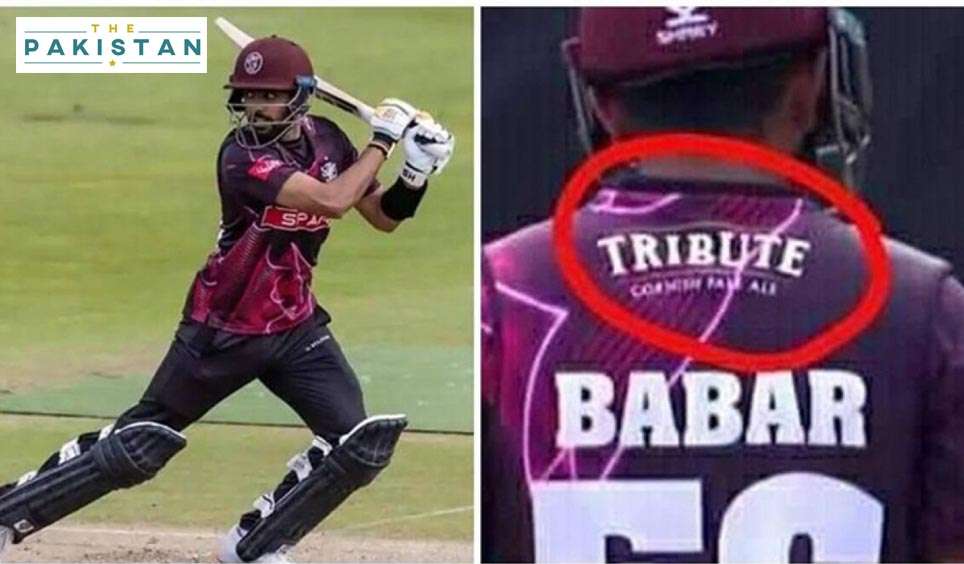 An alcohol company branding on the Babar Azam’s Somerset shirt has caused quite a controversy as the fans have shown their anger against Pakistan’s T20 captain sponsoring alcohol which is haram in Islam.

The sponsor’s logo for a brand of alcohol on Babar Azam’s Somerset shirt was left on in error. Somerset will be removing the logo before their next match in the T20 Blast, cricket analyst and sports editor Saj Sadiw on his Twitter account.

He said the sponsor’s logo has gone from Babar’s shirt posting a picture of Azam in his official kit on the ground in yesterday’s match.

Somerset had earlier at end of Pakistan tour confirmed avilabity of Babatr Azam for the seven Vitality Blast group-stage games, and the knockout stages as well in ase the team qualifies.

Babar was also given a no-objection certificate from the PAkistan Cricket Board and a new visa was also arranged by the board for the series.

Babar had remarked that he really enjoyed playing for Somerset last year and I can’t wait to get back to the club. Meanwhile he said that for Covid-19 reasons, the series will be different this year as the game has changed ever since restrictions were imposed on public gatherings and players had to be extremely careful and vigilant to observe standard operating procedures.

“We have all had to adapt and I’m just really pleased that we could find a way to make this happen. I hope that I can help to contribute to success on the field for Somerset again,” he added.

Pakistani film Bench to be screened at Cannes